Read an article from the local newspaper, "The Leader", about one woman's experience with domestic violence. They interviewed me as well and I am referenced in the article. 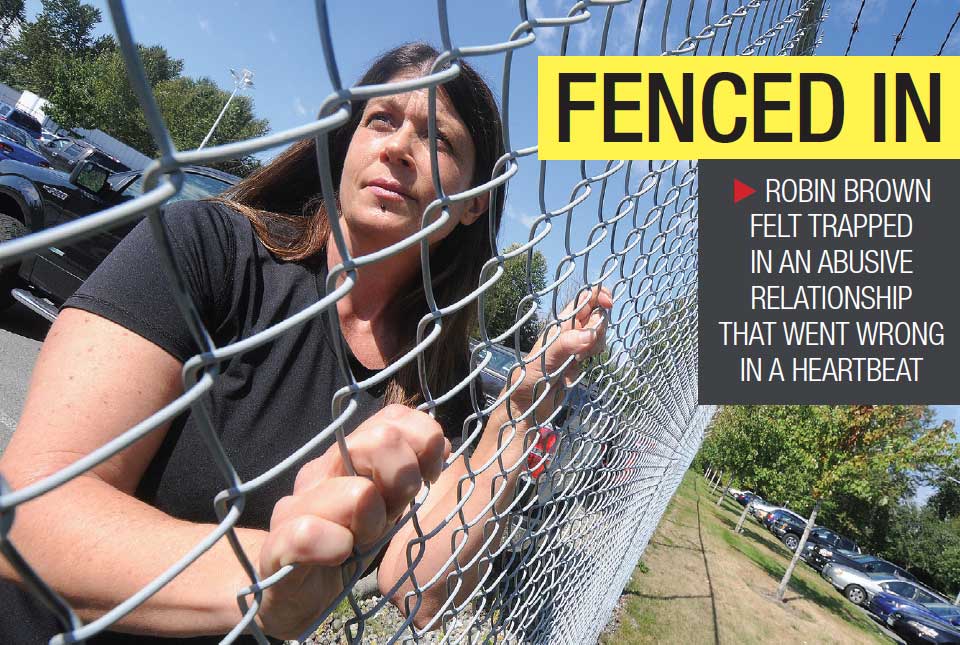 Robin Brown stands in an Annacis Island parking lot where she was kept locked in a car for 16 nights while her boyfriend worked. Brown is sharing her story with the hope it will help other women recognize the signs of abuse and seek assistance. EVAN SEAL

Both eyes badly blackened and lacerated from his punches, she lay crouched in the car in the fenced-in parking lot on Annacis Island.

As darkness fell, the temperature in the car dropped, and her body and mind became numb. Th e only sound she could hear was the incessant thrum of nearby refrigerator trucks.

She once again wondered how she was going to escape, or whether she would even live to try.

More than once, suicide seemed like the only solution.

“I thought that was my only way out,” says Robin Brown, now 48, who often felt death would be better than what she was going through.

Brown, a weightlifter and amateur boxer, had met Matthew Recknagel in 2011 at the gym where she worked out.

Nineteen years younger than Brown, he was good looking, charming, smart and made her laugh. He was a body builder and mixed martial artist and Brown began training with him.

In September 2013, they went out for coffee on a date and started seeing each other.

However, Brown soon sensed something was amiss.

“I could tell he was starting to be controlling already,” she says softly.

At the start, Recknagel insisted she text him all day, and accused her of lying – particularly about any dealings she had with other men, including her clients. On Oct. 17, 2013 she told him she was going on a business trip with her boss at the vitamin company where she worked. He forbade it, but she insisted.

He punched her in her left eye, blackening it badly.

He initially agreed, but he came to her house, let himself in with a key she had given him and told her she could not break up with him. He then punched her in her right eye, splitting her head open at the temple.

While there, he took her cellphone, her computer, her purse, and wrote an email to her boss saying she quit. He then deleted her email and Facebook accounts.

Brown now felt completely isolated, paralyzed with fear, and thought refusing his demands could be fatal.

On Oct. 24, 2013, while Recknagel and Brown were driving to dinner, he began beating her about the back and shoulders. She rolled down the window, called for help, and tried to jump out of the moving vehicle. He pulled her back into the car and punched her in the face.

Still serving a term in the community for uttering threats and assault of another woman in Nanaimo, Recknagel kept Brown close to him around the clock at his mother’s Langley home where he was serving his sentence. He sneaked Brown into the home while his mother was sleeping, but Brown believes the mother must have known she was there.

Recknagel told Brown if she tried to the police, she’d be dead, she recalls.

He called in sick from his delivery dispatch job for several days to keep tabs on her.

When he returned to his night shift at work, he took Brown with him.

He told her she had to stay in the front seat of his car hidden under a white wool blanket. Recknagel had taken Brown’s wallet, identification and keys; he had everything that belonged to her.

She was told the car door was alarmed and if she tried to escape, Recknagel said he’d know before she could navigate her way around the eight-foot barbed wire fence. He would catch her, she remembers him saying, and he would beat her senseless.

Brown learned quickly not to eat or drink before the nightly 10 hours of confinement, as there was nowhere to relieve herself. As a result, she lost 30 pounds.

Court documents show Recknagel kept Brown confined in his Chrysler 300 at his place of work for 16 nights.

On Nov. 28, she overheard him receive a call that he would have to drive delivery, meaning he would be away from the car.

The following day was her opportunity – possibly her only chance – for escape.

She had been gathering loose change for some time, and had accumulated a total of $25.

Th at day she saw a cab pull up to drop someone off outside the gate. If there was any time to go, it was then.

She opened the door, the alarm screamed, and she ran, feeling adrenaline course through her system.

This was her one and only chance. She grabbed the cab and went straight to the police.

Recknagel was arrested shortly after and was sent to jail to finish his previous sentence.

He also faced new charges including unlawful confinement or imprisonment, uttering threats and six counts of assault involving Brown and another woman.

He made a plea bargain and pleaded guilty to uttering threats and two counts of assault. He was sentenced to seven- and-a-half-months in jail.

He had an opportunity for early release on Sept. 9 of this year, but opted not to apply.

Today Brown still struggles with feelings of guilt and embarrassment that she didn’t act more quickly to get out of the relationship.

But things happened so fast.

Brown often thought the only way to be completely free from her abuser would be by consuming a bottle of sleeping pills.

“I thought he would never let me go.”

She lives in fear of seeing him again.

The cycle of violence didn’t include the hallmark “remorse” phase, in which the abuser promises to reform his ways, Carey says.

“It’s as much a psychological limit as a physical limit,” says Carey, who has 30 years of experience treating people who have suff ered trauma.

“The fear is so great, you get the deer-in-the-headlights reaction. So it’s not possible to walk away.”

It’s much the same, Carey says, as a child’s inability to walk away from a bad parent.

The fact that Brown didn’t run away from Recknagel was actually “a very well-honed sense of self-preservation,” Carey says.

Court documents say Recknagel is considered a moderate risk for “assaultive behaviour towards an intimate partner” and if he’s taking steroids, that risk climbs to high.

When Brown looks back on the experience, she says it’s hard not to tally the loss.

“I’ve lost my job, I’ve lost my livelihood,” she says, adding she’s also lost her sense of security. “Now I live having to look over my shoulder all the time… I still have anxiety when I see the types of vehicles he used to drive.”

Worse, she’s lost some respect for herself.

“I’m embarrassed that I went through this, because I saw the signs. I tried to get out, but obviously I didn’t.”

She’s sharing her story with Th e Leader in hopes that this won’t happen to any other women.

October is National Domestic Violence Awareness Month, which was created in 1995 when several organizations joined forces to draw attention to the problem.

While men also suffer violence in intimate relationships, the majority of victims are female.

Some facts of violence against women:

How to get help:

“Pauline is someone who makes people feel at ease.  She has a combination of intellect, wisdom and heart that inspires trust.   Her work addresses the many layers of experiences we have that can directly or indirectly how we living today.  Her approach has the potential to help dissipate those layers and it changes the way we respond to the many things that come up in our lives.”